You are invited to join us for Scouting for Bricks 2014 in northern Virginia. Boy Scout Troop 39 will be hosting a LEGO® fan event called "Scouting for Bricks™" on May 3-4, 2014 at Heritage High School in Leesburg, Virginia. This is our second year hosting this event which promotes a love for all things LEGO® and offers the opportunity for local LEGO® enthusiasts to exhibit their creations during a two-day weekend event. Please visit our webpage at www.scoutingforbricks.com for more information regarding Scouting for Bricks™ 2014. Last year we had over 2500 visitors at Scouting for Bricks™ and expect to see that number increase this year.


Scouting for Bricks™ is a fundraiser for Troop 39. We have several scouts who love LEGO® and came up with the idea to have a LEGO® show as our annual fundraiser. This event is similar to Brickfair® but on a reduced scale. In 2013, we had over 75 exhibitors participate in Scouting for Bricks™ including the Washington Metropolitan LEGO Train Club, the WAMALUG Great Ball Contraption, Mindstorms robots, and Star Wars Storm Troopers from the 501st Legion. Several vendors from last year have already committed to joining us again this year including Clone Army Customs, Classic Plastic Bricks, and Abbie Dabbles to name a few.


If you love LEGO® or just want to support Scouting, please join us as an exhibitor during Scouting for Bricks on May 3rd and May 4th in Leesburg. Check out our website www.scoutingforbricks.com and Like us on Facebook.


We look forward to having you join us in May as part of Scouting for Bricks™ 2014. 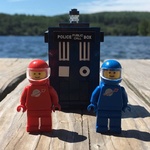